You are here: Home1 / Neighborhoods2 / Midtown 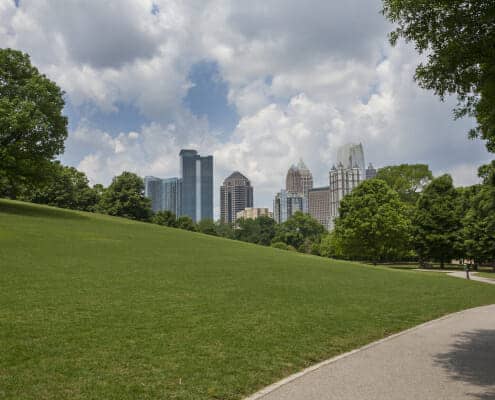 As you might expect, Midtown Atlanta real estate includes a seemingly endless selection of homes, townhomes, apartments, lofts and condos for sale.

There is always something to do. Often these actives center around the fabulous Piedmont Park pictured here.

Midtown Atlanta housing choice ranges from new high-rise condos and apartments to historic homes in the nostalgic areas of the neighborhood.

Spend just a few minutes in Midtown and you’ll quickly realize that people here are on the move.

There are two free public shuttles offering service to Midtown’s choicest locations. The Georgia Tech Trolley runs from the Institute’s Transit Hub on Ferst Drive to the Midtown MARTA Station on 10th Street.

Transportation is more comprehensive in Midtown than anywhere else in Atlanta. There are many stops throughout campus and Midtown, including the Publix Supermarket off West Peachtree near Tech Square. And, with the exception of official Institute holidays, the Trolley operates all year long. Boarding at the Arts Center Station, the Atlantic Station shuttle runs the length of the 17th Street bus only lane to The Flats, also making stops at designated MARTA bus stops. The many convenient transportation options add to the appeal of Midtown Atlanta real estate.

Midtown is also one of the best Atlanta neighborhoods for cycling. Midtown’s elaborate street matrix and ample eight-miles of bike lanes make navigating while cycling extremely, safe, easy and convenient.

Similar to Mapquest, the website ‘Ride the City’ makes it easy to plan bike trips in and around Midtown and the rest of Atlanta. If you’re a dog lover, you’ll be happy to know that Midtown is one of the most dog-friendly Atlanta neighborhoods.

Midtown’s accessibility by automobile is unparalleled since there is quick access to I-75/85 and connections to the Westside by way of five bridges. Midtown Alliance works diligently to, among many other things, improve the transportation network. There is a focus on better traffic flow through signal management, intersection governance, improved signage as well as bridges and thoroughfares.

Midtown Atlanta real estate offers a super convenient location along the I-75/85 connector. Midtown is generally thought of as the area between Downtown Atlanta and Buckhead. It’s in zip codes 30308 and 30309.

Adjacent neighborhoods include West Midtown to the west, Ansley Park to the north, Virginia Highland to the east and Old Fourth Ward to the south.

Midtown Education And The Arts

Midtown is arguably the epicenter of Atlanta’s education and arts. This fact is also contributes significantly to the ongoing success of the Midtown Atlanta real estate market.

Since 1933, Midtown has been home to Atlanta’s John Marshall Law School. Including Georgia Tech and the world famous Emory University Hospital, Midtown boasts exemplary institutes of higher learning. These colleges and universities are helping to transform Midtown into a thriving hub of innovation collectively fueling a thriving research and science arena.

The educational partnership in Midtown has raised Atlanta’s national profile in the bioscience industry. They’ve done this by developing physical infrastructure and attracting the talent necessary to foster rapid growth in the fields of healthcare and medical research.

Midtown enjoys a growing reputation as a hotbed for the birth of lucrative high tech start-ups. Coca Cola World Headquarters is also in Midtown. It sits adjacent to the Georgia Tech campus and a dedicated ten acre bio-lab facility known as Technology Enterprise Park. Proximity to excellent employment opportunities contribute to the ongoing popularity of Midtown real estate.

There are three high schools in Midtown. One of the highest rated schools is Grady High School, which has a rating of 6. It has 1,464 children. The public schools in Midtown are in Atlanta Public Schools District. Other Midtown schools of note are The Children’s School, The Orion School, Bright Horizons Family Solutions, Centennial Place Elementary School and Fulton County Charter High School of Mathematics & Science.

Midtown is home to Atlanta’s thriving arts scene that includes but is not limited to Fox Theatre, Ferst Center for the Arts, the 14th Street Playhouse, Woodruff Arts Center, the Museum of Design Atlanta, the High Museum of Art, the Center for Puppetry Arts, and the Atlanta Symphony Orchestra.

Real estate development activity has surged through Midtown in recent years at a rate far above that of the rest of Metro Atlanta.

Beginning in 2000, numerous high-rise condo buildings were built in Midtown including 1010 Midtown, Spire and Viewpoint. In 2004 the Seventeenth Street Bridge over the Downtown Connector opened and reconnected Midtown with the west side of the city – West Midtown and to the Atlantic Station neighborhood development, built on site of the former Atlantic Steel company.

Nature lovers can even enjoy access to Atlanta’s largest noticeable convergence of green space boasting over 225 acres of parks including the beloved Piedmont Park and the Atlanta Botanical Gardens.

The neighborhood has by far the best big-city cultural vibe in Atlanta. Live here and you will definitely see why so many people love it. Here are the top 10 reasons to love Intown Atlanta living.

The neighborhood offers the High Museum of Art, the Woodruff Arts Center, the Atlanta Symphony Orchestra, the Fox Theatre and many other arts and entertainment venues.

You can choose from a range of Midtown Atlanta homes and condos for sale. From high-rise condos to bungalow-style homes on quiet, tree-lined streets. Midtown also offers the city’s crown jewel of parks…Piedmont Park.

This huge, green oasis in the heart of Midtown is the site of many of the city’s most popular events, including Atlanta Gay Pride, the Atlanta Jazz Festival and the Atlanta Dogwood Festival just to name a few. Midtown really does have something for everyone.

Thinking of selling? Get the best tips for selling your Midtown condo.

It’s never too early to get started!